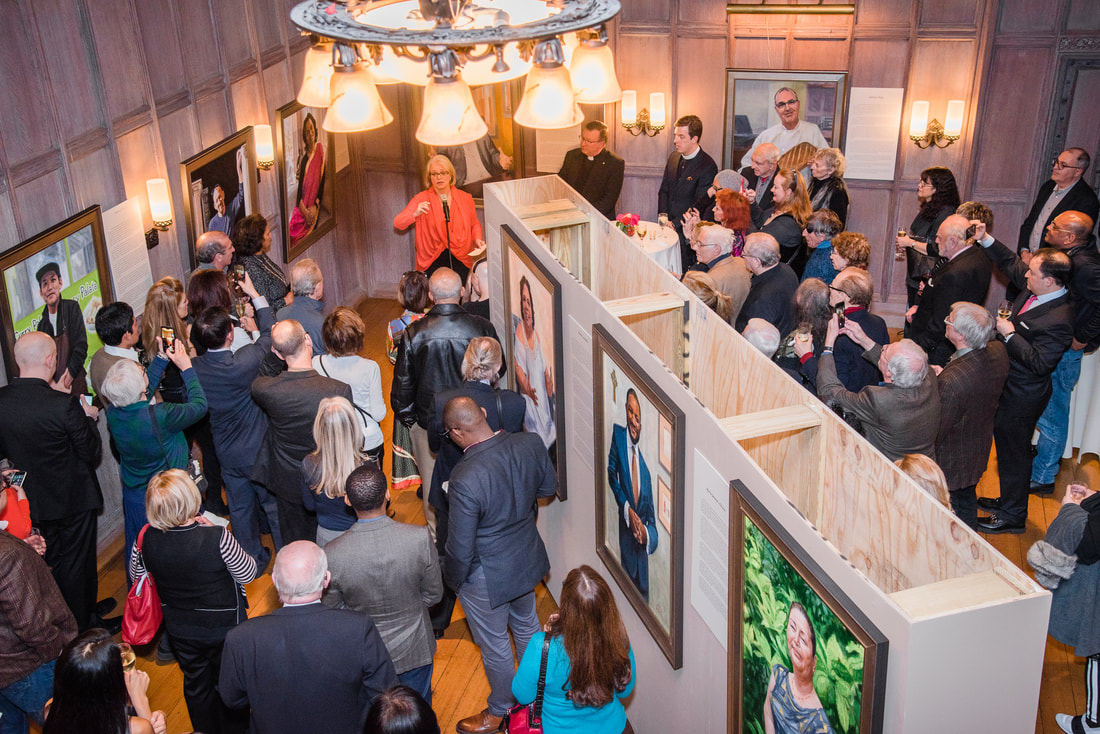 Speaking at the Opening Reception-- photo by Reiko Yanagi.
​     The hate-filled language hurled at immigrants and refugees during the 2016 presidential campaign was my wake-up call.  Sitting in church one Sunday, hearing the commandment to "Love thy neighbor,"  I felt that I could be doing something better than painting commissioned portraits for the well-to-do and accomplished -- not that I don't enjoy doing that.  I love to work with people (well, most people) and to push paint around a canvas.

But the old journalism skills that I'd used for twenty years as a reporter/correspondent on CBS News and New York and Washington, D.C.  television stations came bubbling up as if the good Lord were telling me that I should do something more useful with the odd assortment of talents I'd been given.  I could interview and paint immigrants and refugees, beginning with people I see every day, to show and tell America who today's newcomers really ​are.  I could do my part to counter the fear and hate being spread so widely -- by using a paintbrush, pen, truth, and understanding.

To my mind, calling today's immigrants and refugees "criminals" is like damning all airplanes because one crashed somewhere, then demanding that they all be grounded.  Yet, horrible as a plane crash can be, and despite all the deaths and days of media coverage, we don't blame or ground all planes.  Why not?  Because we know that eight million people landed safely that day, and the day before, and the day before that, and we know that air transportation is a good thing.

Likewise, we shouldn't try to block immigrants and refugees from coming to this country. The vast majority of them are good  people running away from crime and chaos, not creating it.   In fact, as many American cities have discovered, when immigrants move into a neighborhood, the crime rate goes down! Our new immigrants become hard working, taxpaying residents and citizens; they renew deteriorating neighborhoods.  Those are some of the many surprising facts compiled by New American Economy, a nonpartisan think tank that studies the economic impact of immigration in the U.S.  A few of those facts are in the exhibition.

My mission has been to find and meet immigrants and refugees from a variety of countries, religions, and cultures.  I've sought out people who have come to this country in recent years -- with and without proper visas -- to find out why they came here, what it was like getting here and settling in, and what they've been doing since.​  I've met strong, resilient people who have faced challenges most Americans today cannot imagine.  Look at the character in their portraits.  Read their stories.   Ask yourself what you would have done in the same situation..  I've thought about that, and much more that I've learned, while listening to all seventeen  people  share their stories.   It's been a great journey.